Through its teaching, visual and performing arts divisions, the NCAAA brings the best of the Black world to you.

The National Center of Afro-American Artists (NCAAA) is a private, not-for-profit institution committed to preserving and fostering the cultural arts heritage of black peoples worldwide. Since 1968, the NCAAA has forged an unbroken record of public service through its arts teaching and the presentation of professional works in all fine arts disciplines.

The Museum of the National Center of Afro American Artists (NCAAA) is dedicated to the celebration, exhibition, collection and criticism of black visual arts heritage worldwide. The Museum presents a wide range of historical and contemporary exhibitions in many media, including painting, sculpture, graphics, photography and decorative arts.

Located in the Roxbury neighborhood of Boston, these institutions were founded in 1968 by Dr. Elma Lewis who remained its Artistic Director until her passing. Edmund Barry Gaither serves as NCAAA’s Director and Curator of its Museum division. 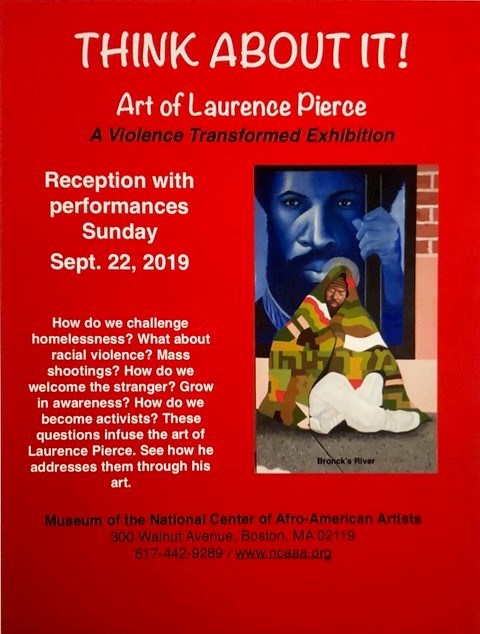 THINK ABOUT IT: Art of Laurence Pierce features paintings, drawings and constructions that unify the artist's aesthetic and social concerns while pushing viewers to question their own thinking about major issues that we face as a society. Pierce positions himself as an artist who takes his civic and humanistic responsibilities seriously. Among the questions he raises are: How do we tackle the challenge homelessness? What should we do about racial violence? Mass shootings? How ought we welcome the stranger? What actions help us grow in awareness? And how do we become truly engaged with the issues of our times?

While his painting Trumpland initially seems highly decorative, it actually presents a biting critique of the forty-fifth president of the United States. The critique continues in S’hole Countries which underscores contributions to US artistic and political culture by people from the Caribbean and Latin America, as well as by African and African-descent people from throughout the Americas. Trump had denigrated immigrants from such backgrounds. Another work, The Beloved Fallen, recalls the deaths of African-Americans at the hands of the police and vigilantes reminding us that racialized violence and injustice are twin terrors. The triptych Bronck’s River presents three homeless people and questions how their plight could exist in one of the world’s richest country. Even more poignantly, he asks how men and women could risk their lives in service to this country only to be rejected by it. In Stages of Awareness, Pierce follows a young man as he gains political awareness and arrives at becoming an activist. He documents the movement from ‘asleep’ to ‘woke’ through the man’s face.

The exhibition is part of a decade long collaboration between the Museum of the National Center of Afro-American Artists and Violence Transformed. Both share the belief that the arts and artists play crucial roles in social healing, self-discovery, self affirmation and community-building

Born in Bronx, NY, Laurence (Larry) Pierce studied at New York’s High School of Art and Design, after which he served in the United States Navy as a photographer and videographer for the Armed Forces Radio and Television Service. Returning to civilian life, he continued art studies at The Cooper Union and School of the Visual Arts (BFA, 1977). In 1991, he moved to Boston and joined the Boston African-American Artists Association. Pierce then established the African Winter Gallery, now African Winter Studio. Teaching art to youngsters, and thereby positively impacting their education and development, became his passionate interest. At The Dimock Center, he taught preschool and headed the Art Department for the “Smart Kids” after school program. Simultaneously, he wrote the curriculum for art, reading and mathematics for Head Start and Early Head Start programs. Other places where Pierce has taught and conducted workshops include Dorchester Arts Collaborative, sparc! The Artmobile (Massachusetts College of Art and Design), Sister Katherine Drexel Community Center and the Grove Hall Branch of the Boston Public Library. In 2017, he won a contract from the Quincy Corridor/Grove Hall Public Art Commission to produce a series of paintings depicting notable figures in a project titled On the Shoulders of Giants. Pierce is a former Artist-in-Residence at The Sustainability Guild in Dorchester, and is a participating artist in the forthcoming KKK (Kids Killin’ Kids) project that will produce a nationally-touring exhibition tackling intra-community violence.